Quavo has finished his horror movie!

Migos rapper Quavo has apparently been producing a horror movie entitled The Resort. He shared on Twitter, “Wow Jus WATCH MY FIRST HORROR FILM I PRODUCED.” He’s been known for his creativity and many talents but this is exciting.

“The Resort Coming Soon, thanks @willmeldman,” he continued on Twitter. There’s no information about it’s release but we’re looking forward to it.

The Resort Coming Soon
thanks @willmeldman 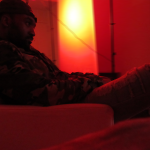