The record was previously held by Michael Vick who rushed for 1,039 yards in the 2006 season. Jackson broke the record on an early scoring drive in Thursday (Dec. 12) night’s match up between the Ravens and Jets. 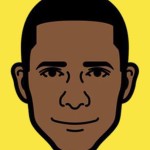